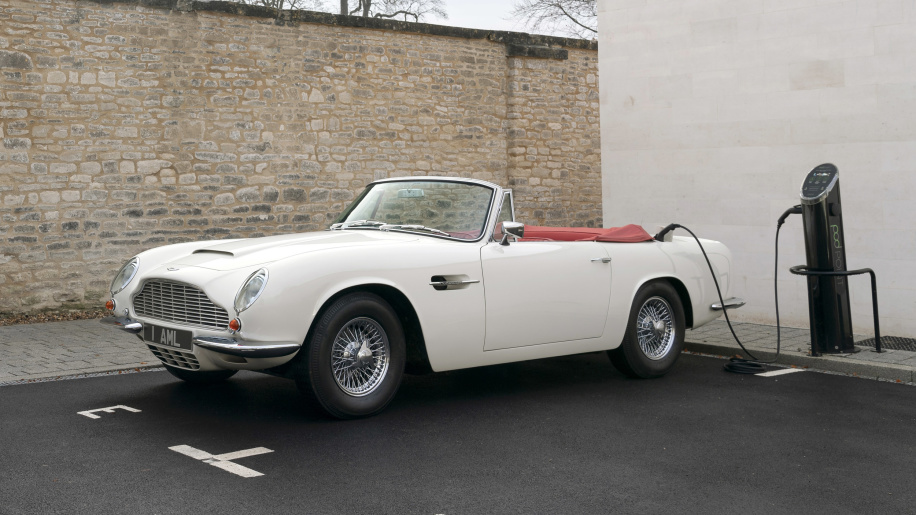 If you're a fan of classic British sports cars, and you're concerned about the environment, the future is looking pretty bright. Similar to what Jaguar is preparing for old E-Types, Aston Martin has just announced that it is developing "cassette"-type electric powertrains that it can drop into classic Aston models. By "cassette," the company means that the whole powertrain assembly can be easily bolted into an existing Aston Martin, and just as easily be replaced by the original internal combustion engine if desired.

The first car to undergo the electric conversion is a 1970 Aston Martin DB6 Volante, and the prototype powertrain bolts up to the factory engine and transmission mounts. If it weren't for a photo showing it plugged into a charger, it would be impossible to tell that it had an electric motor under the skin. Even the interior looks unchanged. Aston Martin says that a small screen has been added that displays motor and battery management, but we can't find it in the photos. This is a stark contrast to the Jaguar E-Type Zero Concept that featured a modern interpretation of the original interior.

Aston Martin didn't reveal any detailed specifications of the powertrain, though. So horsepower and range are complete mysteries at the moment. Aston did note that production examples of this powertrain will use components from the very limited-production Rapide E. That sedan used dual motors for 610 horsepower and 700 pound-feet of torque. Surely the conversion kit will only use one motor for packaging, and since the Rapide E's full power would be unnecessary and deviate far from the original performance and character of the classic car. Also, Aston claimed a range of over 200 miles for the Rapide E, but classic conversions may be less due to space restrictions. Something closer to the E-Type Zero's 170-mile range seems likely, and coupled with DC fast charging, should be more than enough for a car that likely won't be driven as often or as far as a more modern vehicle.

Exact timing and availability still have yet to be announced. Aston only said that it plans to start on conversions sometime in 2019. Since Aston plans on delivering Rapide E models toward the end of 2019, the year is shaping up to be a big one for electric Astons.